Canterbury’s young and up and coming Middle Distance runners once again provided an exciting race on the blue NPW track. A fast aggressive start meant that the pace stayed honest throughout, in blustery nor’ westerly winds. Last weeks 800m duelers tucked in behind the early pacemakers, conserving themselves for the later challenges of the race.

The pace of the race increased over the last 600m with a group of 4 (William Scharpf (CANU), Charlie Hazlett (PRHL), Daniel Roswell (CHAV) and Ethan Smolej (PTOC)) athletes reducing to 3 with Hazlett dropping off, for the final push to 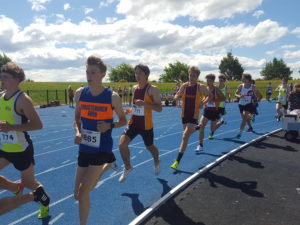 the line in the last 200m. As happened last week, Roswell with his time of 4:02.18, held off Smolej, with Scharpf adding to the mix. Only 0.54sec separated the three athletes on the line. The battle between these athletes is proving to be very entertaining for not just Middle-Distance aficionados but all athletics followers.

The strong winds and high temperatures did not help those in the longer distances.

The field events exposed some new faces for the season.

The Women’s High Jump was won convincingly by Keeley O’Hagan (COBU). Her very good clearance of 1.77m off a shortened approach, augers well for later in the season, especially the Rhythm & Jumps Meeting at the end of the month which will be a replay of the NZ Championships contest with Josie Reeves of Wellington.

The Horizontal jumps events had contrasting winds between earlier in the afternoon and the end of Saturday’s meeting. While the long jumpers had legal winds, which helped 16-year old youngsters Levi Murdoch (PTOC), 6.26m PB, victorious over Asher Pettengell-Brand COBU) 6.25 PB. The Senior Women’s winner was Hannah Maloney with a season’s best of 5.22m.

The triple jumpers were overly assisted by the strong winds ranging up to 8.80m/s. National Senior Champion, Andrew Alan (COBU) opened his season with a respectable 13.55m off a short approach. Ethan Gow (SELW) exceeded his legal PB with a jump of 13.25m but the 7.10m/s wind was excessive.

Josh Bull (PTOC) was again over 4.00m in the Pole Vault, indicating that he is on the brink of a breakthrough in this event.

There was, as expected, close racing in the Women’s sprints but not necessarily for the winners.

Anna Percy (COBU) showed a clean pair of heels to both the 100m and 100m Hurdles. The latter event produced a big PB of 14.13sec, a time that would have secured a medal at the Nationals in March. Second and third in the 100m, Jordan 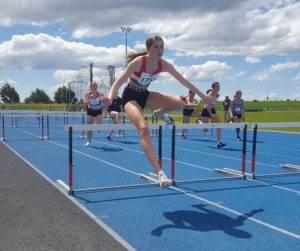 The 400m was won convincingly by Jordan Blake (COBU) with a very respectable time of 56.00 when the wind had picked up to very strong in the front straight. Maicala Steinegg’s (COBU) PB 57.12 headed off Angie Petty (CANU) 57.18 in another close finish.

Luke Mercieca (CANU), National 400m Champion won the 200m/400m double but was beaten by surprise winner, Louis Andrews, over 100m. In this event there was a dead heat for 3rd, only 0.01sec behind runner-up John Wells 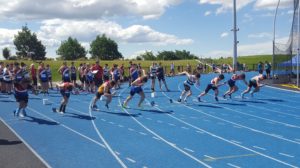 (CCCA), between Mercieca and Will Chun (COBU). James Sandilands was separated from the tie by only thousands of seconds, as he was awarded the same finish time of 11.28.

The meeting ran behind time due to the positive problem of 8 Men’s 100m heats and 5 Women’s 100m heats. This popularity, across a number of clubs, highlights the good work being done in the clubs. It is encouraging that the numbers are large in the M18 & W18 age-groups but the increasing Senior Women’s competitors is also a promising sign.